This summer, ALK is playing professor to a record breaking EIGHT interns! We couldn’t be more thrilled to have these talented individuals with us for the summer. Here’s a little more about them: 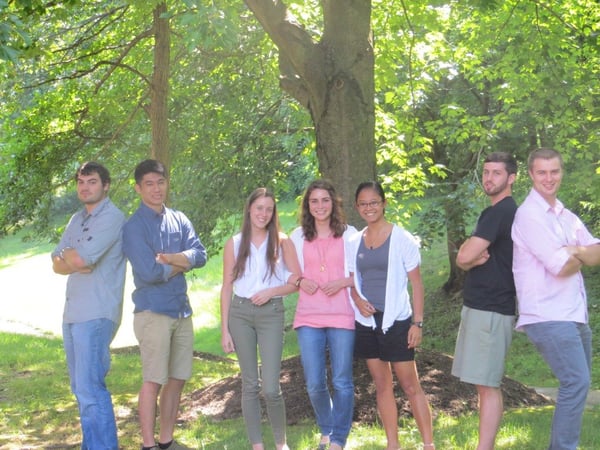 Jesse is a Penn State student interning in our marketing department. While at school, Jesse leads tours for prospective students and their families.

Brian hopes to graduate from Rutgers University in May 2014. He has a passion for dance which he shares through teaching and coordinating for his hip-hop dance team at Rutgers.

Kelly holds her BA in Geography from Rutgers University. She enjoys traveling and being outdoors.

West Virginia University grad Erin Broussard is a GIS intern who knows as much about quality donuts as she does geography. Mainly, living in this part of the country, she misses her favorite donut chain, Shipley’s Donuts which serves only six southern states. She’s currently working on her master’s through the University of Denver.

This GIS intern and Rutgers grad is heading west in the fall to get her masters in GIS from the University of Redlands in California. If there’s one thing you should know about Jess, it’s that she doesn’t like turtles. She loves them. Even more than that kid on YouTube that says he likes turtles.

Frank, an avid outdoorsman and Temple grad, saves lives in his spare time. He was once skiing at Mont Tremblant in Quebec when he rescued a man from exposure who had torn his ACL and couldn’t continue down the mountain.

Trenton is an avid trombonist, and he has played in distinguished venues such as the Macy’s Thanksgiving Day Parade, Cleveland’s Severance Hall, Seattle’s Benaroya Hall, New York’s Carnegie Hall, and the Teatro Municipal, the oldest surviving and functioning theatre in the Americas. In addition, Trenton enjoys using PVC pipes as makeshift didgeridoos, which allow him to provide entertainment to his coworkers at ALK!

Travel lover Radha Shah expects to graduate from Rutgers University in May 2014. She has already traveled to 25 of the 50 states from California to New York.