Brexit & Beyond - What's in Store for the UK Trucking Industry? 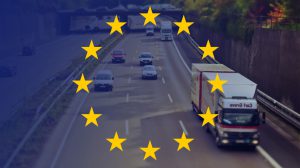 It's been over a year since the British public voted to exit the European Union. The Brexit negotiations have started and every business up and down the country is discussing the effects and risks . The road transportation sector is no exception.
The Department of Transport reports that from June 2015 to June 2016 UK HGVs lifted a total of 7.8 million tonnes of goods . Of them 3.8 million tonnes were exports and 3.9 million tonnes were imports to or from the UK. Not only are the international freight numbers impressive, the UK road haulage industry employs around 290,000 people .  The British road transport sector is a vital part of the economy not only in terms of GDP and employment, but also in providing goods to consumers . So how could Brexit affect the road haulage sector?

Where there's change, there's opportunity. Although trade with the EU27 will likely undergo a period of volatility, the current government is fostering ties with markets outside of the EU . New bilateral trade agreements could increase trade with the US, Australia, India and New Zealand .
Additionally, there is a potential that regulations agreed in the past would be re-visited once the UK has exited the EU . This new autonomy could mean that the industry bodies could have more influence in UK legislation than in the past .

If the UK will leave the free market, new tariffs and customs taxes could affect international trade with Europe:  "In land transport, 99% of international road freight for the UK is to and from the other EU27 nations. As a result, any new tariffs and concurrent trade slowdown could present significant risks to both sea and land transport operations ." ( Source)
Leaving the EU would mean there would be n ew laws affecting the UK from the outside . What would that mean in practice? For example: Longer procedures on borders causing delays, UK supply chain companies having a disadvantage compared to their EU rivals when it comes to European trade, etc.
The transportation sector does not exist in a vacuum and macroeconomic developments affect it . The Brexit decision has weakened the pound, increased inflation and dampened consumer confidence. The cost of imports has increased, consumers have shut their wallets and companies invest less due to the economic uncertainty . These developments could have a negative knock-on effect on the transport industry. UK trucking companies will be less likely to invest in long-term projects in times of unpredictability . Less trade with EU member states means less jobs for UK supply chain providers, and so on.

The main point of contention when it comes to Brexit and the UK trucking industry, is the potential driver shortage due to stricter immigration policies: "The hardest hit of all the transportation sectors would be trucking, where an acute shortage of UK drivers is being worsened by the prospects of an ageing workforce . Trucking relies heavily on drivers from the EU; truck owners are simply not able to recruit enough British drivers to keep pace with demand . Of the 290,000 drivers of heavy goods vehicles in the UK, approximately 60,000 are from the EU . Any reduction of the sector’s recruitment options will compromise its ability to serve the economy . Any reduction in supply will raise trucking costs for manufacturers." ( Source)
How do you think Brexit will change the UK trucking industry? Do you see any effects already? Let us know on Facebook , LinkedIn  or Twitter .
Resources: