We're hiring developers who love building great software products. ALK is dedicated to developing best-in-class solutions and services that power many of the industry's largest transportation fleets. As we continue to expand our portfolio and customer base, our need for passionate, talented developers grows as well. CODE LOCAL WITH US!

“At ALK, we work with motivated individuals who care about what they’re doing. It’s a place where developers don't have the schedule or stress of a startup, but we’re still small enough where no one becomes a nameless employee.”

Meet Tim, a Senior Software Engineer who has been with ALK for 3 years. 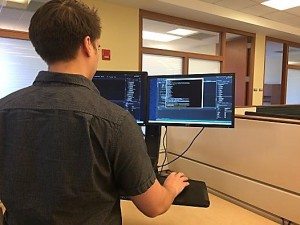 We asked Tim what he likes best about ALK and he said it’s the opportunities given to developers to impact our products. When he first started, he realized he had the knowledge and expertise to significantly improve the rendering performance in our CoPilot mobile navigation app. Even though it wasn’t related to his work at the time, he brought it up with his team lead, and was given time to prototype his idea and propose the project. They let him do it, and he has been leading the charge on graphics ever since.

Tim specifically chose ALK after commuting to NYC from Central Jersey. He couldn't stand all the crowds, sounds, smells, and how much time he lost every day just to traveling. Since then he has lived both North and South of Princeton, and both commutes are short and relaxing. Driving country roads with trees and rivers to work through Princeton every morning, while having the option to visit the city via mass transit nearby, is the best of both worlds.

ALK’s culture and commitment is to ensure that its engineers work on problems they are passionate about, creating pride and enjoyment in the job, as well as true accomplishment in the project.  Tim's most recent project was the challenge of re-writing how ALK renders UI elements to the screen, a yearlong endeavor. The end result was a huge increase in FPS for OpenGL enabled devices, much greater than he could have ever hoped. The project also made the codebase easier to read, easier to write new UI elements for, and provides a great foundation for future optimization work.

We’re looking for talented and dedicated engineers to join us in creating innovative software for GPS navigation, mapping, and solutions that enable transportation of goods around the world.